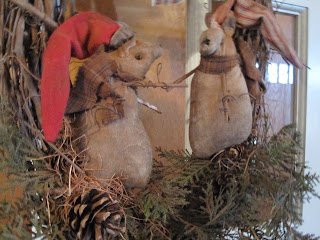 Well doesn't feel much like a winterwonderland here today, its around 70 and I have plants starting to come up from the ground, feels more like spring.  But its starting to look like winter inside, I always decorate for the seasons, it stays up for 3 months and I usually do a little tweaking in between.  I just love this mouse wreath I had ordered from Gatherings, just love Wanda's shop.  I tend to decorate with a lot of mice and snowmen in the winter. 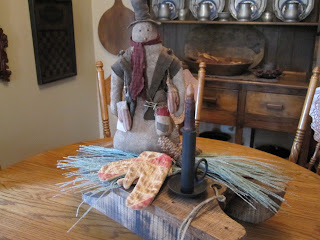 This is one of my favorite snowmen I have collected over the years.  I picked up the little pair of mittens at the Rusty Relic this time.  I had found an old sled someone had made, love using it in my arrrangement along with some frozen greenry, which I fell in love with last year. 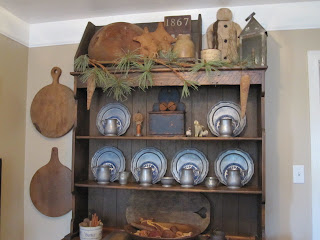 This is one of my favorite stepback's, it was made by my friends husband several years ago, one of my first pieces I collected.  Love to display my pewter on it this time of the year.  I think my favorite part is the top to decorate with the different seasons. 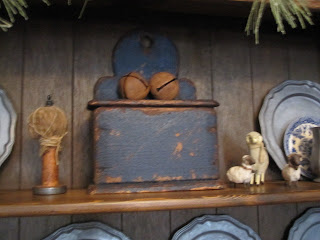 A blue box found on one of my trips to Va. and one of my pinkeeps I love to collect.  The two small sheep were made by my friend Justine at Mycronynme Primitives, she has some really neat items on her website. 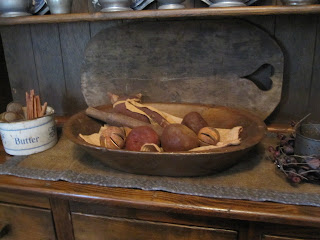 Love this old trencher my aunt had given me, found the dried oranges this year at Nanbrook Farm they smell so good, the apples came from the Rusty Relic. 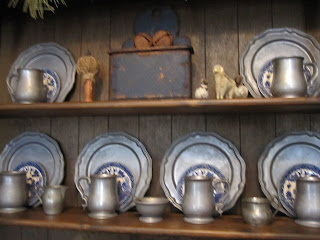 The eight place setting of pewter I found here at a local high end thrift shop a couple of years ago, love using some of my blue willow plates with it. 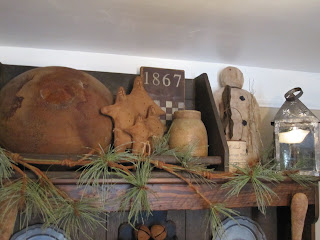 And here is my favorite part of the cabinet, just love decorating it with the different seasons, this cabinet sits in my dining room.  The large bowl was a gift from a friend and the large bowl rack I found at Primitive Gatherings shop in Tn.  I found the large frozen branch, which I love at The Country Heart in N.C.  I had also picked up the ginger guys there a couple of years ago, since then I have been making them, great pattern.  The snowman and the little pail was picked up at Nanbrook Farms Christmas open house this year. 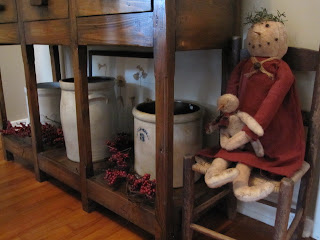 This is the bottom of the cabinet, a collection of crocks and the picture sitting behind it has special meaning, I helped my oldest son Justin with that when he was in school and won an award for it. 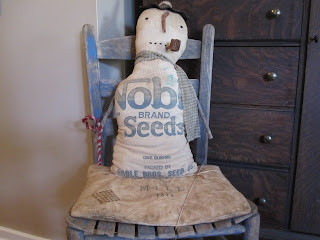 One of my new snowmen purchased from Sweetpeas's Primitive, just love the pipe and corncob used for his hat and the feedsack she used for his body. 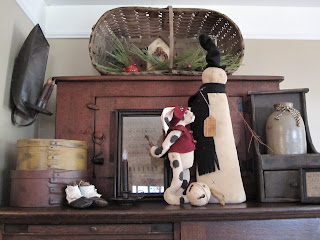 I had found this cute snowman in a local antique mall here several years ago.  Love the rabbit with the carrot, the tag on the snowman reads; Have you seen my nose? 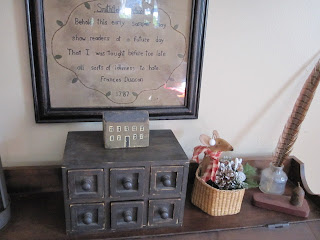 Top of a old slant top desk picked up on one of my many trips to Charleston.  I made the little mouse, decided he needed some earmuffs.  I have been collecting samplers lately, this one I picked up at The Rusty Relic, she has some neat ones. I have a couple more coming will have to share them with you. 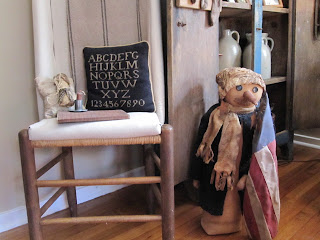 This awesome snowman came from Settler's Crossin along with half her store I purchased that day.LOL. Just love his coat and hat which is made out of a quilt.  I had actually moved my living room around, love the cabinet here better, gives me more room, we have Oliver's pack n play in this room. 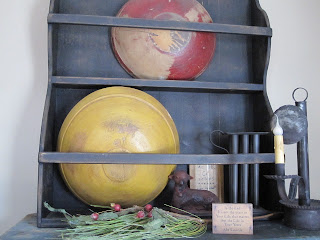 Bowl rack sits on top of the old blue cabinet with a couple of old bowls. Added some frozen branches and a sheep here.  The whalers lamp was purchased from Wanda at Gatherings. 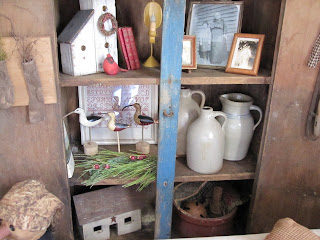 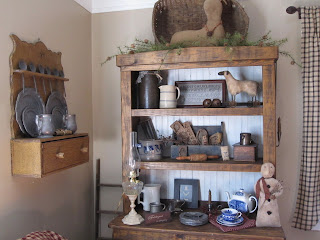 On the other side of the room is this step back cabinet, it is a new piece, but I love it, so hard to find the old ones.  Love the little mustard hanging shelf with the pewter on it. 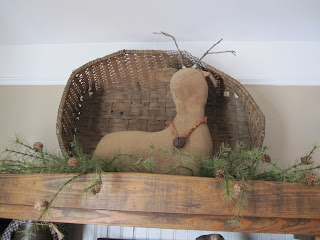 This is the top, picked up the deer a couple of years ago from Primitive Gatherings shop in Kingsport, Tn.  The old large basket was a recent purchase from Settler's Crossin. 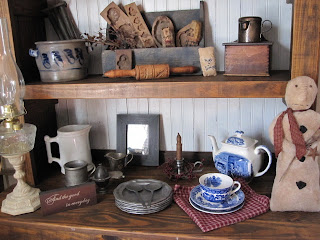 A few of my cookie molds I collect, I have this thing for wood items.  The old white buttermilk pitcher I got from my father's antique shop when I was a teenager.  When my son Chris was born, Oliver's dad, my hubby and oldest son, Justin he was 3 then, they had picked wild pink roses and brought them to the hospital to me, a memory I will always treasure along with the pitcher. 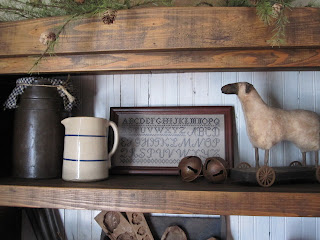 I have been collecting old crocks lately, this one I found on one of my trips down to Settler's Crossin, and the needlework I had done back after my father died, I had to keep busy, I turned out several of those then. 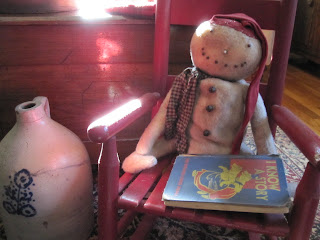 Can't wait until Oliver can use my old red rocker I used as a child, the snowman is holding my storybook my father use to read to me.  The old crock belonged to my uncle, my aunt gave it to me after he died. 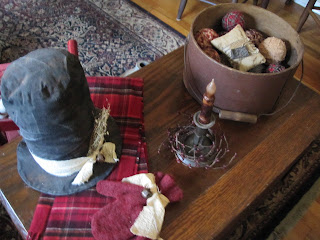 Top of an old blanket chest that sits in front of my couch.  Love the old red measure with the rag balls collected over time.  The snowman hat and mittens were done by a local artist. 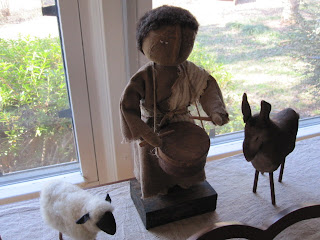 The little drummer boy was made by my sister, no pattern, she is very talented.  Well needless to say it never made it out of my house, had to have it.  My son Chris plays the drums, Oliver will probably follow in his footsteps.  She did a fantastic job on the donkey and the sheep. 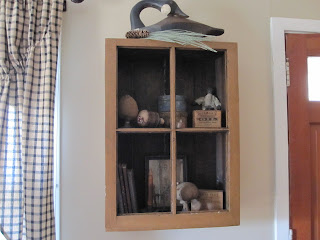 I love the mustard shelf, it holds my every growing pinkeep collection.  Speaking of pinkeeps, just got a new one in the mail today, will have to find the perfect place for it, a little rabbit sitting on a snowball, will have pictures of it coming. 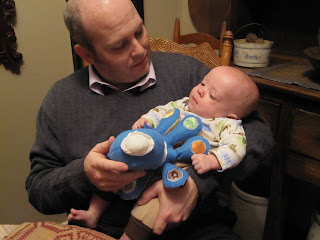 Saved this to last, my oldest son Justin giving Oliver a new toy he had found for him.  Justin just loves Oliver so glad he just lives up the street from him, I think Oliver will enjoy going to Uncle Justin house.  Oliver is doing well, he now weighs 13 lbs. and he loves to eat his veggies, can also hold his cup now, progressing really well.  We are thankful for his progress after not knowing how things would turn out after being born so early. Well that is just a little of my decorting for this season, will try to get the rest of the pictures took and loaded up.  Everyone have a great week, Hugs.  Vicky
Posted by Green Creek Primitives at 2:18 PM

Starting on April 15th and the 15th of every month we will be on Early Works Mercantile.

Shops I Love to Visit

Friends In the Booth

Green Creek Primitives
Our father, Douglas Kimbrell,was raised in Green Creek, N.C. on land that has been in the family for nearly three centuries. In the 1960's when my sister Lisa and I were young, Dad opened up one of the first antique shops in Spartanburg, S.C., little did we know this would spark our love of old that would carry us our whole life. Dad did what he loved so much for 40 years, sadly he passed away in 2006. I wanted to do something in honor of him, so this site, Green Creek primitives, is dedicated to our father who gave us our love of old. Now a little bit about me, my name is Vicky Huckaby and I have been married to a great guy Steven for 32 years. We have two terrific sons, Justin,31 and Chris,28. Chris just married on October 1st to Brandi, the best daughter-in-law you could hope for. I own a cleaning business for the past 20 years. I love to make primitive handmades for my antique booth that I have had for 2 years.

My Favorite Blogs and Sites